This project focuses on the analysis of biological concept generators for load-bearing structures in view of the intrinsically competing aims of optimality versus multi-functionality and robustness. The overall goal is a deeper understanding of the principal underlying mechanisms in the evolution of biological systems and the specific properties emerging from these formation processes.

This comprises, in particular, the investigation of two partly complementary hypotheses derived from the same basic theory concerning evolutionary design principles. According to this theory, the design process of biological systems is more complex than a pure optimisation process, since the system has to maintain multiple functions simultaneously in order to ensure survival under various environmental conditions. Moreover, robustness against perturbations and imperfections is a crucial property that traditionally optimised systems might not possess.

Hypothesis 1: Assuming that multi-functionality always constitutes a compromise between opposing optimisation criteria, we hypothesize that the performance of technical load-bearing structures, for which only some of these criteria are important, can in principle be even better than its biological concept generator. However, this can only be achieved by approaches that go beyond a pure copying of the example and require an understanding of basic design principles of nature, including those important for technical implementation within the conceptual design process, while neglecting the unimportant principles. Thus, our goal is to obtain such an understanding and, based on that, to develop new design principles for technical implementations of load-bearing structures.

Hypothesis 2: Systems emerging from evolutionary processes are intrinsically more complex and more robust than ‚minimal‘ solutions optimised to maintain a single specific function. This hypothesis was originally motivated by the recent literature on systems biology related to a concept termed ‚functional robustness‘, which is so far mainly used in connection with intracellular regulation processes. This means that living cells have developed elaborate mechanisms to maintain certain functions under perturbations and are thus able to ensure survival under variable environmental conditions. The existing literature mainly deals with ordinary differential equation models with underlying network structures. In this project, we wish to investigate whether evidence also exists for such a positive correlation between structural complexity and robustness against perturbations and imperfections of the biological concept generators for engineering structures.

One of the methodological concerns of this project is to perform abstraction in a quite formal approach based on graph theory, rather than the phenomenological or geometrical appearance of the biological concept generators. This provides the possibility of transferring biological principles, i.e. of achieving optimality and robustness, beyond the original biological functionality. More precisely, a biological example for a load-bearing structure does not have to be a load-bearing structure itself but can be any biological entity exhibiting a similar formal structure.

The overall aim of this project is to attain a deeper understanding of natural design principles and their mathematical abstraction in order to develop methods for designing efficient, robust and multi-functional technical structures that reach beyond existing concepts of multi-objective and robust design optimisation. Our project tcontributes to the advancement of knowledge in reverse bionics and enables creative structural design with natural methods that do not involve the mere technical implementation of solutions existing in nature. 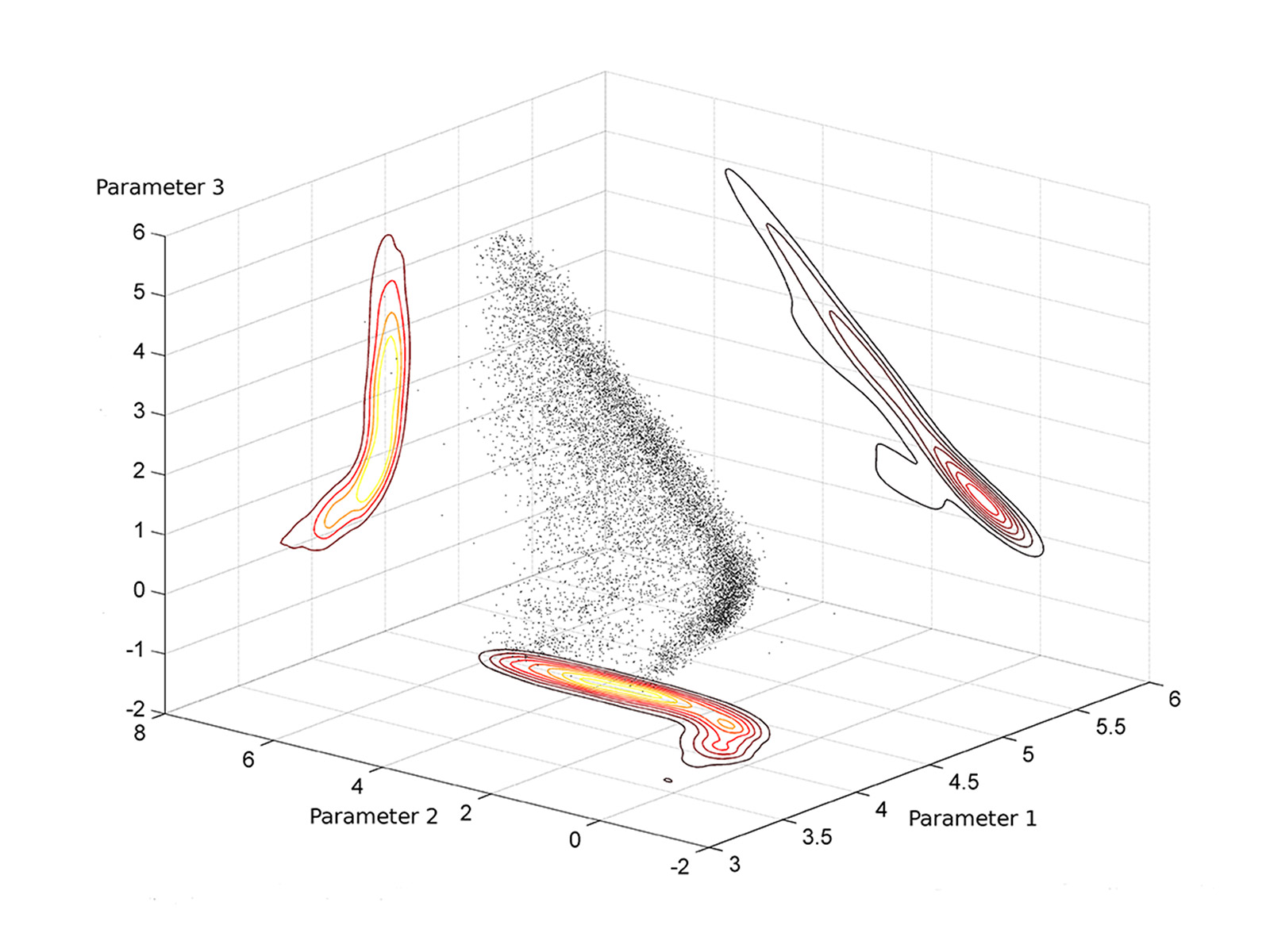 Sample from a probability distribution in the parameter space that shows a highly correlated structure.