Within biomimetics, scientists are challenged by the interdisciplinary exchange of knowledge and concepts, which include functional principles in complex systems of biological organisms, of buildings and of machines. Despite representing the primary hierarchical level on which morphological form and functionality cohere, the individual organism, as a functional unit, has been neglected within modern biology. A similar trend can be recognized within modern architecture: as an integral concept, the built form has been lost from view. Both architecture, in its encyclopaedic approach, and the life sciences struggle with the modern phenomenon of specialization within the sciences and arts. Hence, our project (C02), in cooperation with engineering, focuses on the integrative nature of organisms, although engineers have not as yet approached this subject within a scientific context.

In this framework project, biologists/paleontologists will co-operate with architects/construction engineers to extend the field of biomimetics into a discipline that also integrates basic epistemological theories instead of solely dealing with exploitable knowledge. Based on the divergent and interdependent organism concepts of biology, architecture and engineering, we aim to reconstruct and further develop the theory of the organism and to evolve a common system and vocabulary of concepts and structures for the field of architectural and constructional biomimetics. We plan to determine the basic approaches, principles and concepts by which complex biological constructions and architectural artefacts are characterized and explained with respect to their functionalities. In defining a common vocabulary of basic terms and concepts regarding the systemic level of the organism, this approach intends to facilitate communication within the TRR 141 between biologists, architects and engineers.
In mutual interaction with selected sub-projects A and B, this project intends (1) to document and evaluate historical and existing ideas, concepts and classifications of the organism in biology, architecture and engineering, (2) to compile, formalize and systematize functional aspects resulting from biological, architectural and technical organismal constructions and their interlinked subsystems, (3) to establish an interdisciplinary and formalized vocabulary for the field of architectural and constructional biomimetics documenting both congruencies and differences between the organism concepts and systems of concepts of the three disciplines and (4) to compile significant terms and their definition in the form of a glossary with regard to their use in the various areas of expertise and daily routine. These principle points will form the basis for a future period of support of the CRC (years 5-8) in which we shall evaluate to what extent computer-assisted system-theoretical approaches and (bio-) ontologies can help to comprehend complex organisms enabling relationships of cause and effect to be drawn between various structures and structural levels.

The involved scientists form an interdisciplinary research team involving the fields of biological zoology and morphology (O. Betz), paleontology (J. Nebelsick), architectural theory and philosophy of science (G. de Bruyn) and applied architecture and engineering (J. Knippers). In their previous research, these scientists have been involved in integrative approaches with regard to the form and function of organisms in their relationship to the external environment. 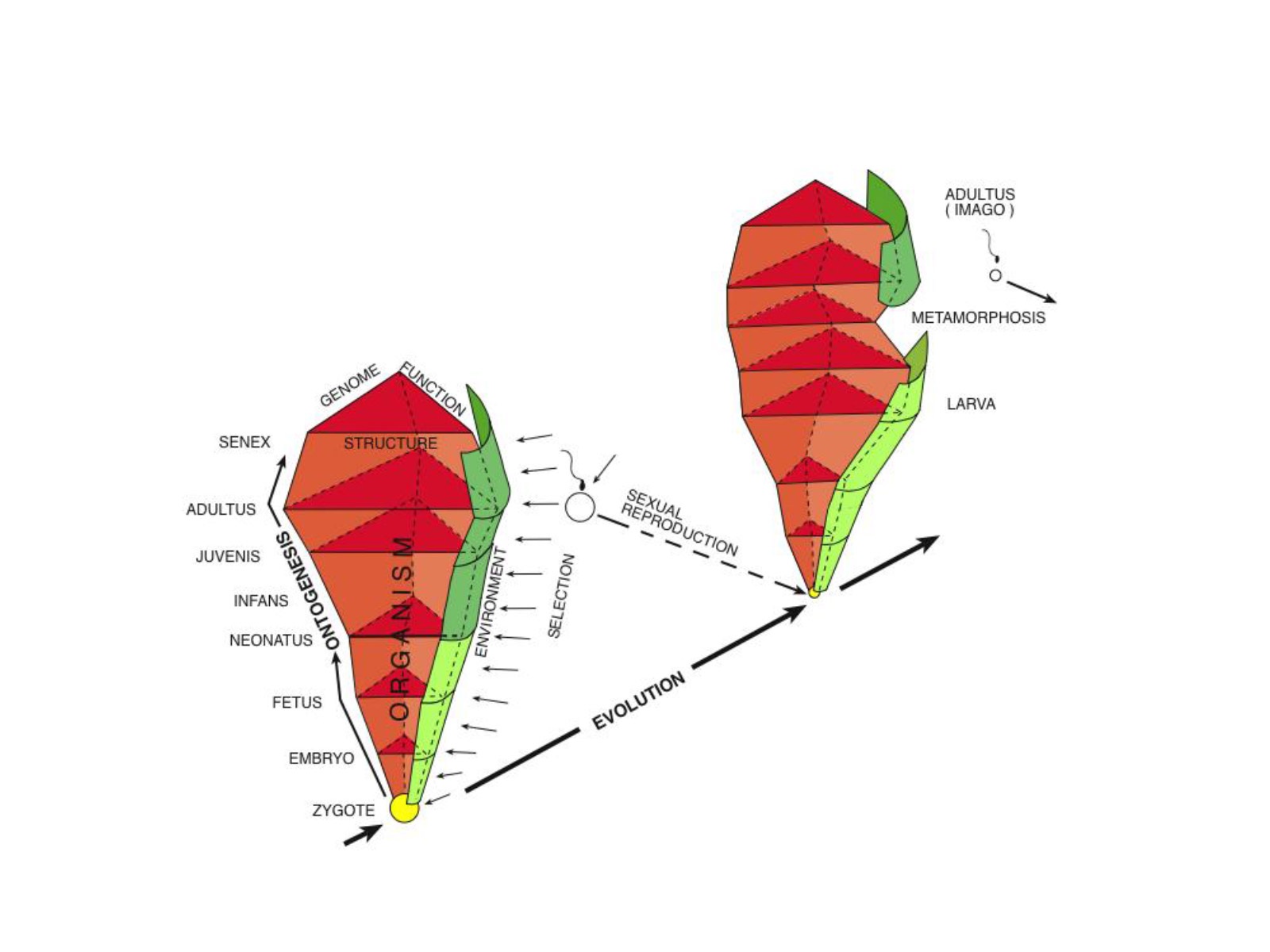 Representation of a biological organism stressing its historical dimension. The organism is considered as the result of ontogenetic adaptation (vertical axis) and evolutionary transformation (horizontal axis). From Maier, W. (1999): On the evolutionary biology of early mammals – with methodological remarks on the interaction between ontogenetic adaption and phylogenetic transformation. Zool. Anz. 238, 55-74.